Ken Pithouse, a customer of Wrights of Lymm has always painted his models with gold paint where required but has never been happy with the results(the gold never really hardens and goes black wherever you've handled it).  He bought Hellers 1/76 La Reale De France and since it had so much gold on it he thought how can I get a better finish, then it hit him to use real gold. Ken has been a member on several modelling forums and never seen real gold used before so wondered if it would work, well judging from the response on all the forums I think a lot of people will be doing this in the future  Here are some photos of the La Reale(she was Louis the iiiv royal galley)  The second ship is the Royal Sovriegn (nearly bankrupted king Charles, he bought out the ships tax) 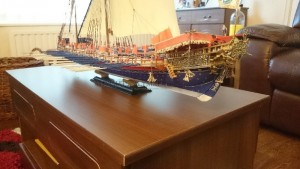 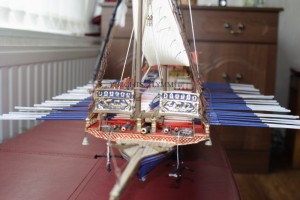