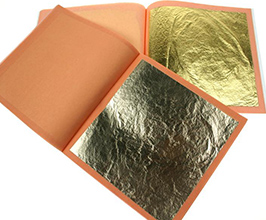 Gold is valued both for its natural beauty and because it can be fashioned into most intricate and satisfying shapes and preserves for centuries its lustre and colour.  Gold is also the most malleable of metals and from the earliest recorded times craftsmen have hammered it into leaf of a thinness less than the wavelength of visible light, invisible on edge under the highest powered optical microscope 1/250,000th of an inch or 70 millimicrons.  Because of this thinness beaten gold conforms with the contours of the surface of the material on which it is applied by the gilder - stone, wood, glass, leather or other substances - using an adhesive "size" of water, oil, white of egg or other suitable ingredients.  When skilfully applied the durability of the Gold Leaf is evident from the face masks and mummy cases of the rulers of Ancient Egypt entombed in splendour with their gilded furniture and ornaments.  These and other examples of beaten gold from antiquity, preserved in museums throughout the world, are comparable in every detail with Gold Leaf of the present day produced by the same methods in the unbroken tradition of the craft of goldbeating.

In place of the rounded stone of an earlier age goldbeaters today machines for most stages are used with the assistance of a cast iron hammer with a wooden shaft to finish the final stage.  To make gold leaf three separate stages of beating are required, and the goldbeaters skill lies largely in control of the hammer during the final process of beating.  In this process the goldbeater must carefully enlarge the pattern of the blows to follow the increasing area of gold as it moves under the hammer to the infinitely thin, film like state to which it is capable of extension.  While he is beating the goldbeater must also constantly bear in mind the degree of heat of the skins caused by the impact of the hammer blows, helping the gold to spread ; the skins ,must not, however, be overheated or they will become distorted and the gold disrupted.  The goldbeaters greatest skill and experience is, therefore, called for during this third and final stage of beating known as the "mould" which lasts some 3 and a half hours.

Gold is received from the bullion merchant in the form of "grain" ; this is melted in a crucible, then cast into a bar and rolled into ribbon from which squares are cut for beating in the first of the three stages.

For the first beating these squares of gold are placed between sheets of specially prepared Montgolfier paper, 200 making the "cutch" in which after 30 minutes they are increased in size under the blows of the hammer and reduced in thickness.  They are then quartered into pieces to provide the second beating of some 50 minutes known as the "shoder".  This is made of specially ground melinex.  The shoder is beaten out in the same process as the cutch and when finished, the squares are then quartered again and then placed in to the final beating known as the "mould" .  The mould is beaten and after approximately three and a half hours it is possible to see through the even transparency beaten in the centre of every leaf.  The gold leaf in its ultimate state of perfection and delicacy is now taken from the skins, leaf by leaf, by women workers called "cutters".  The cutter has the intricate task of placing each leaf separately on a calf skin cushion by deft movements and little puffing breaths and with the aid of boxwood pincers.  She then takes a tool called a "waggon" in her right hand  - a light boxwood frame carrying two knives of sharpened rattan cane set 80mm apart - and draws it lightly across the finished leaf in both directions, thus separating the rough edges of the beaten leaf and leaving a 80mm square on the cushion .  This she lifts with her boxwood pincers and places on a sheet of tissue paper in a book holding 25 leaves of gold when filled.  When the cutter has "booked" the square of gold leaf she uses a light puffing breath on the rough edges, blowing them into a container beneath the cushion to be collected for melting down and further use.  The finished gold leaf is sold in books of 25 leaves.  250,000 of these leaves piled on top of one another would be only 1 inch thick ; laid side by side they would make a strip more than 12 miles long.

The "books" in which the gold leaf is sold are of tissue paper rouged to keep the gold from adhering to the paper.  Where gold leaf is to be used for outdoor application - when without a backing it would be carried away by the slightest current of air - sheets of tissue paper somewhat larger than the gold leaf, are inserted into the pages of the already filled books.  As these transfer papers are not rouged, the leaf adheres to them by pressure in a press, thus enabling the gilder to handle them with ease in the open.

To reduce the effort of beating by hand attracted the attention of Leonardo da Vinci 500 years ago to the possibility of a machine for goldbeating, but no evidence survives of any measure of success. However his original artwork did.  With the advantage of modern scientific devices, however, experiment over several years found the method.  Beating by hand with a series of lights affixed to the hammer, arm and wrist of a beater was photographically plotted ; from the results the design was evolved for the transfer of the movements implicit in the human actions of the craft to the operation of an automaton.  As a result a battery of computerised mechanical hammers - of necessity controlled and tended by skilled hand goldbeaters - assists in the production of gold leaf of a quality fully equal to that of the past.

After each beating goldbeaters skins are cleaned with a brime powder (calcined gypsum) and dried in a hot press.  The moisture is then eliminated from the skins by a curious running down process known as "flying" to separate the skins from one another.

Silver, Platinum and Palladium can also be beaten into leaf but are used less frequently than aluminium, which has the great advantage of cheapness and is without the tarnishing characteristic of silver.  Metals other than gold are less malleable and cannot therefore be beaten as thin.

Gold is assayed i.e its purity is ascertained and expressed in carats (in origin a type of bean) of which 24 represent pure fine gold, from which leaf is made for gilding statues, churches, public buildings, mast-heads and hulls of ships, carriages, tombstones, weather vanes, clocks, heraldic shields and signs in the open where other metals would tarnish.